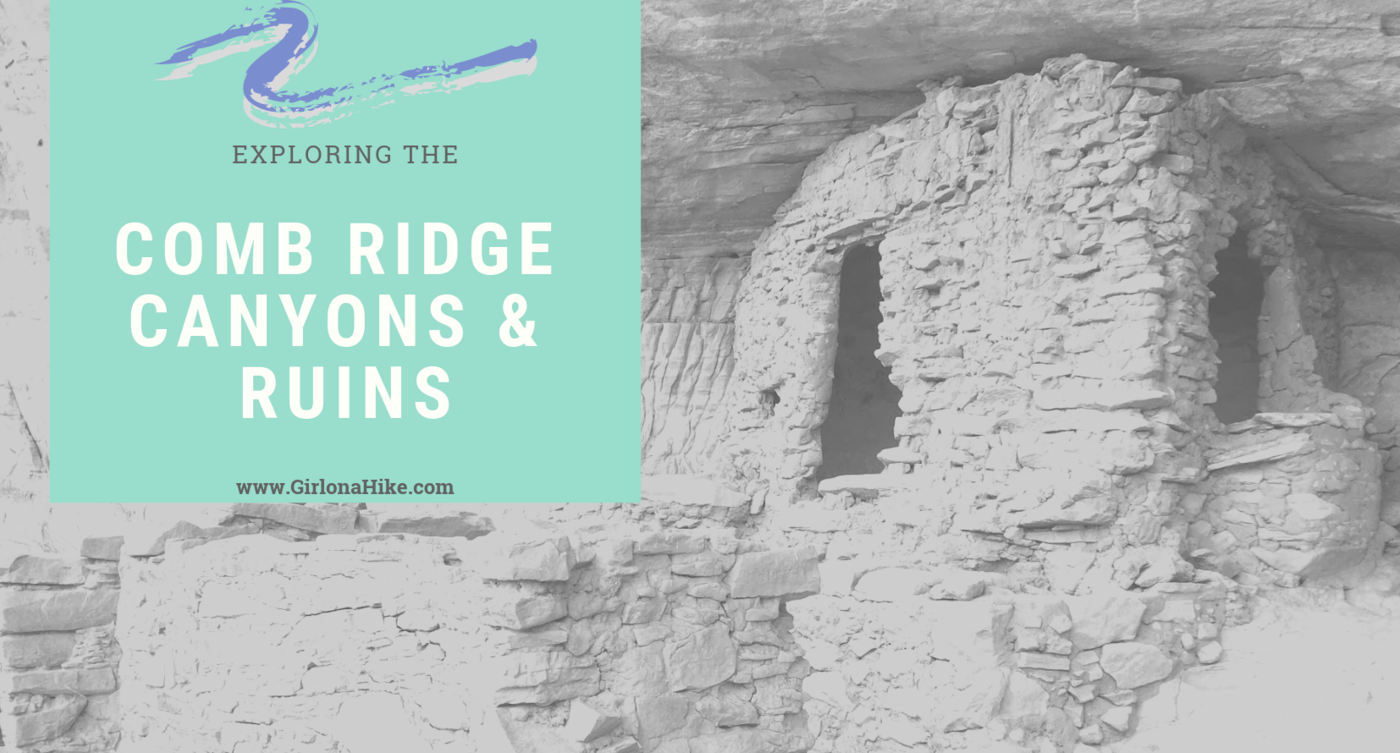 Comb Ridge is a 90-mile long Navajo sandstone ridge (or monocline) running North to South, and is home to many ancestral ruins and petroglyphs that date back around 800 years old. Comb Ridge itself has a gentle eastern facing slopes, while the west side has “teeth” that jut out and above the ridge line. Each of these “teeth” contain drainages that lead to the San Juan River. The Puebloans lived, farmed in this area, and left behind a massive amount of ruins and artifacts. Drought, overpopulation, diminishing resources, erosion, and conflict eventually brought an end to this era.

Today hikers come here to explore this natural outdoor museum – most of the trails are short in distance but do require a little route finding, and negotiating ditches, sage brush, hiking over slick rock, with little to no shade and water sources. Before you go, please be advised that the road to access these canyons requires 4WD. Small cars will not make it. There is no cell service and the closest gas station is in Blanding, UT. Be prepared to carry plenty of water and food. This 20 mile point-to-point section of road has slick rock, deep sand, and can often be washed out from recent storms.
Everything is dog and kid friendly, and plenty of camp sites are available for free. Just pick a dirt road and set up camp at a previously used campsite. The hardest part about hiking in this area is knowing which dirt road to travel down. Having a map and clearing your odometer will help guide you. I also recommend having a GPS or one on your phone, such as Gaia GPS, so you know exactly where you are.

I recommend driving South to North. This will put you back on HWY 95, which provides access to many other hiking and sightseeing areas.

From Bluff, UT drive south on HWY 191 for 10.3 miles. Look for the cattle guard and dirt road on the right (north) side of the road. You will see the sign for Butler Wash. 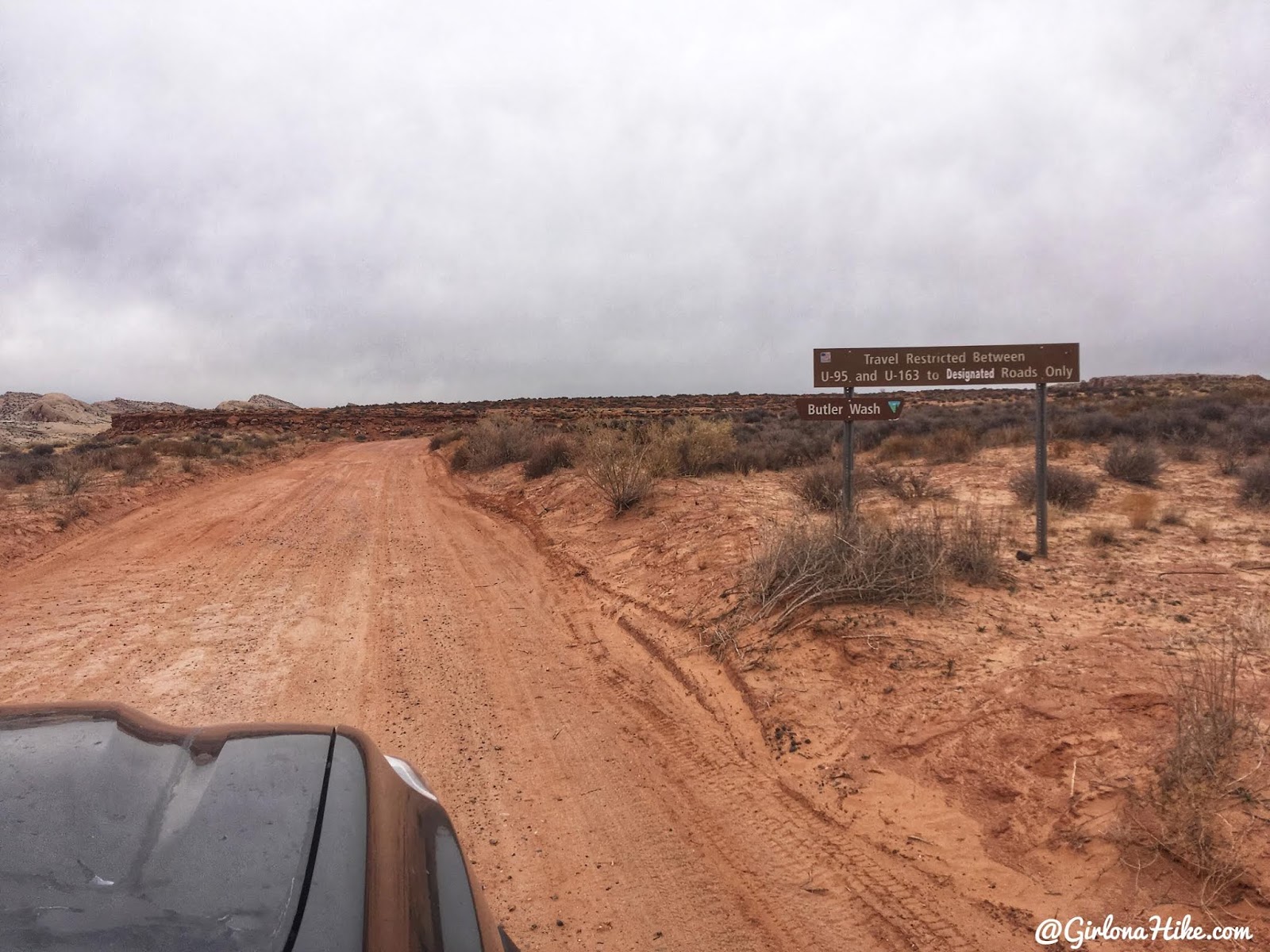 Here’s a driving map to the start of Butler Wash. Reset your odometer to 0 here.

Each trail varies for distance and elevation gain.

Remember that my mileages for each TH are traveling South to North.

At 1 mile you will see a cattle guard, and a dirt road just before it heading East. Drive down to the end of this road where the trail begins by a brown sign post.

Cairns lead the way across slickrock, and eventually to a ledge where you can see Butler Wash below. Follow the ledge to the South (left), following cairns again. There’s one small area with a big step down, but then look just past the alcove to the right where you’ll see a small rope fence and the Wolfman Panel above it, on a south facing wall. 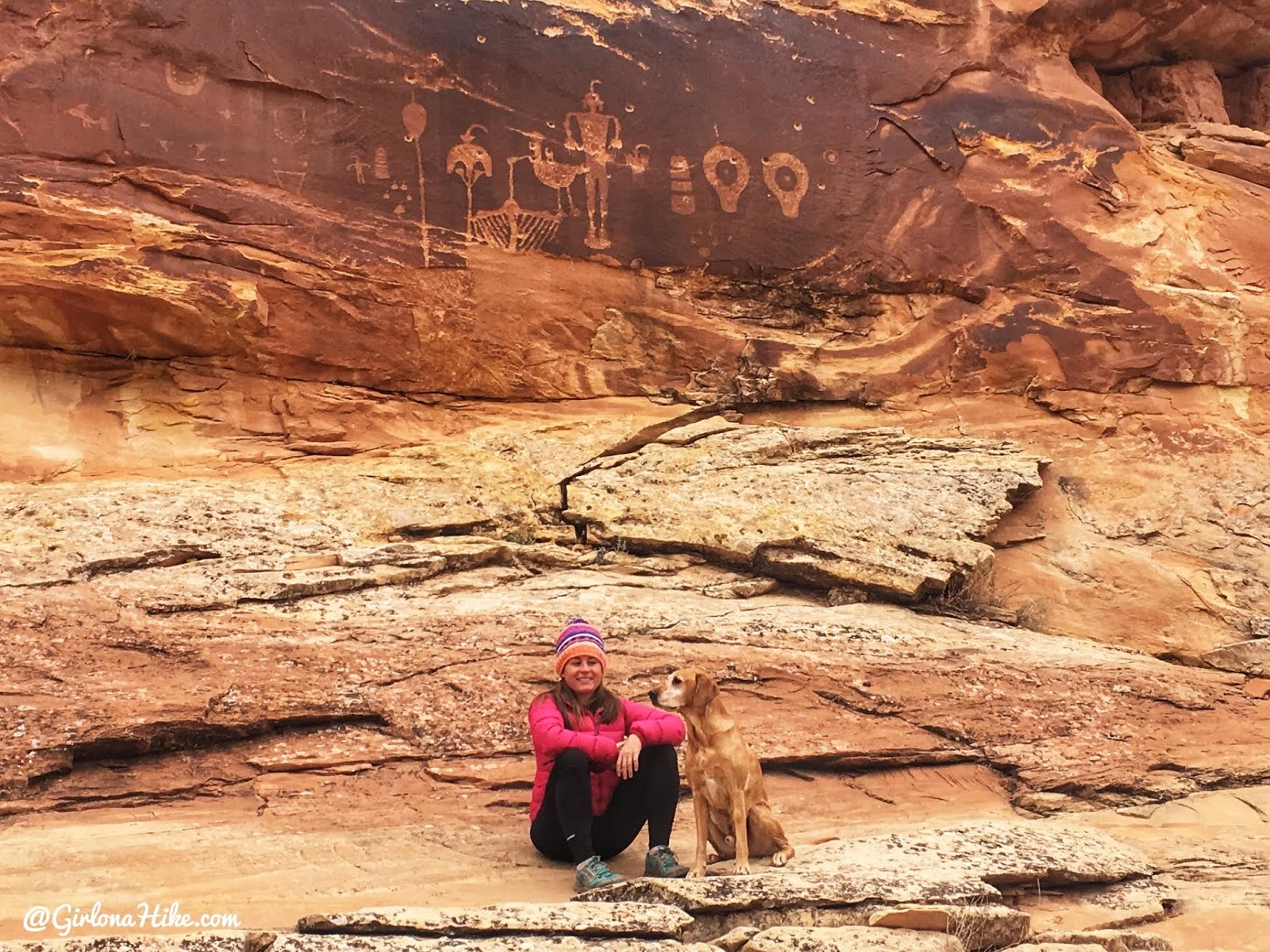 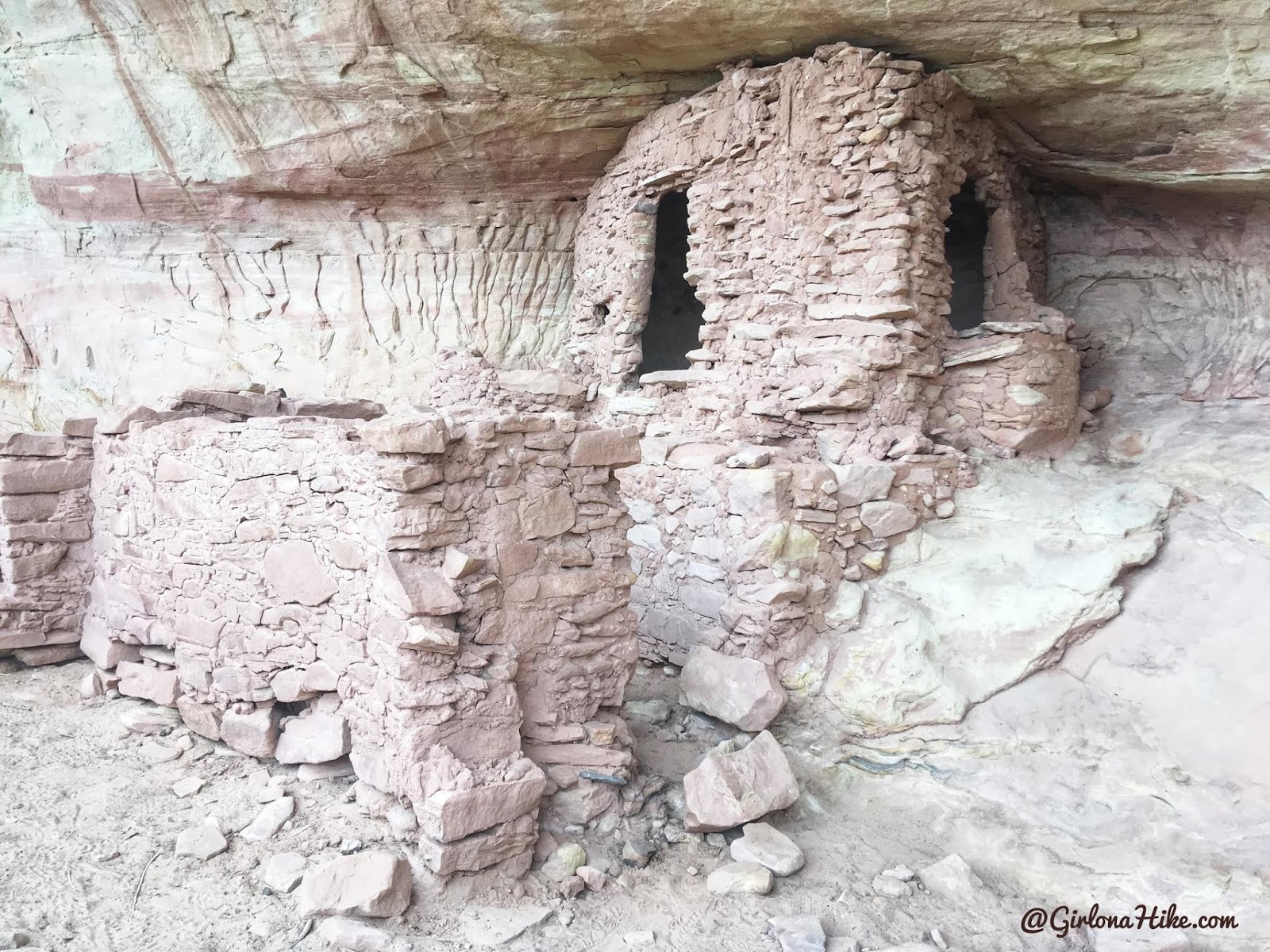 If you follow some of the other trails in the area, you’ll be able to reach a non-named ruin site as well. They are in poor condition, but there are pottery shards to look at, and you can see about three old ruins.

At 3.9 miles along the Butler Wash Road, there are three left forks. Of those two, chose the far right loop.

The trail immediately drops NW into an arroyo (steep gully), then ascends the far bank. Cross a shallow wash, then reach slick rock 5 minutes from the TH. You’ll eventually pass two ancient teepee structures. Right after, you’ll then see the fenced off area for Double Stack Ruin. Don’t forget to look up to see the upper ruin (not accessible to hikers). 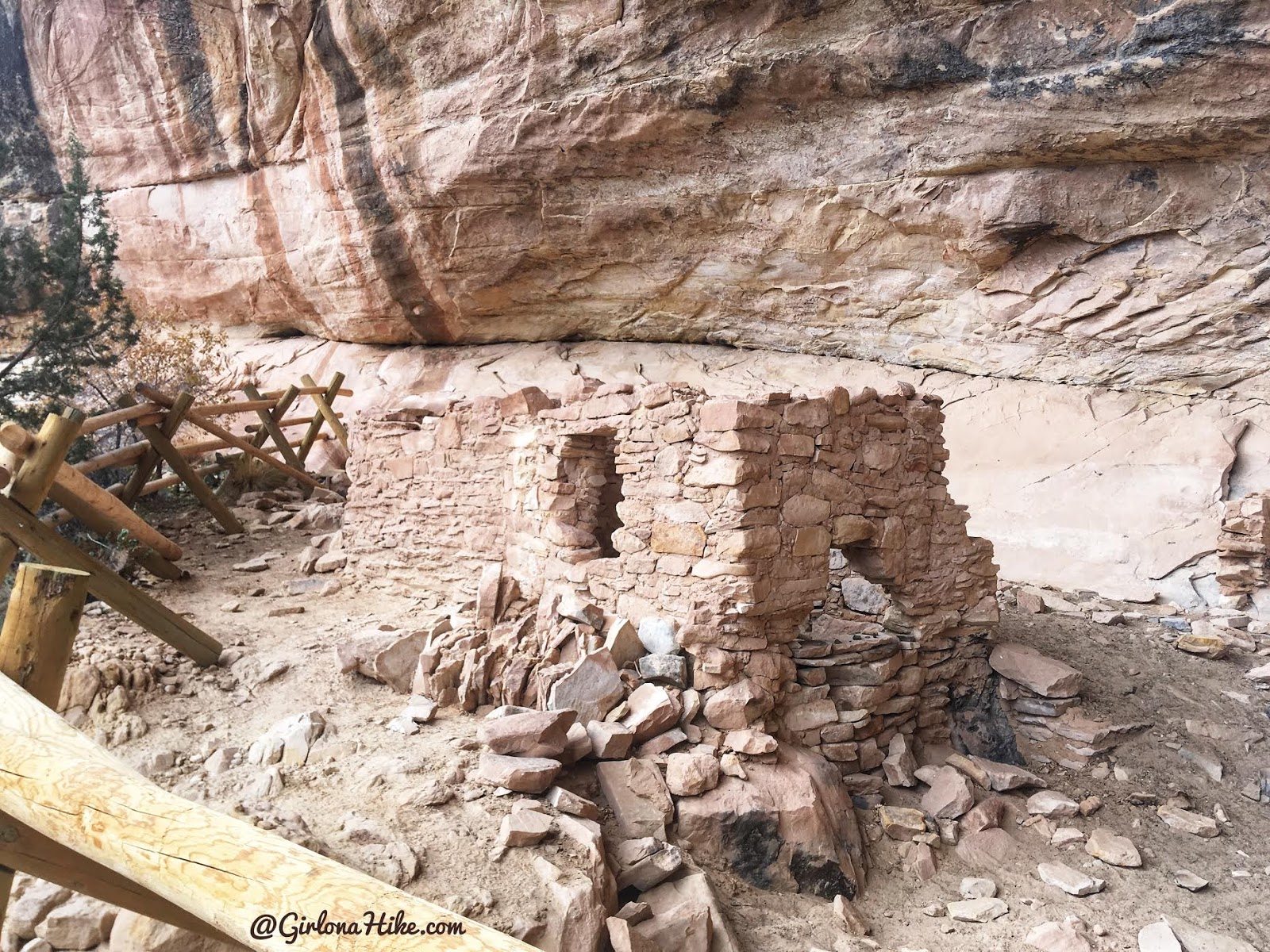 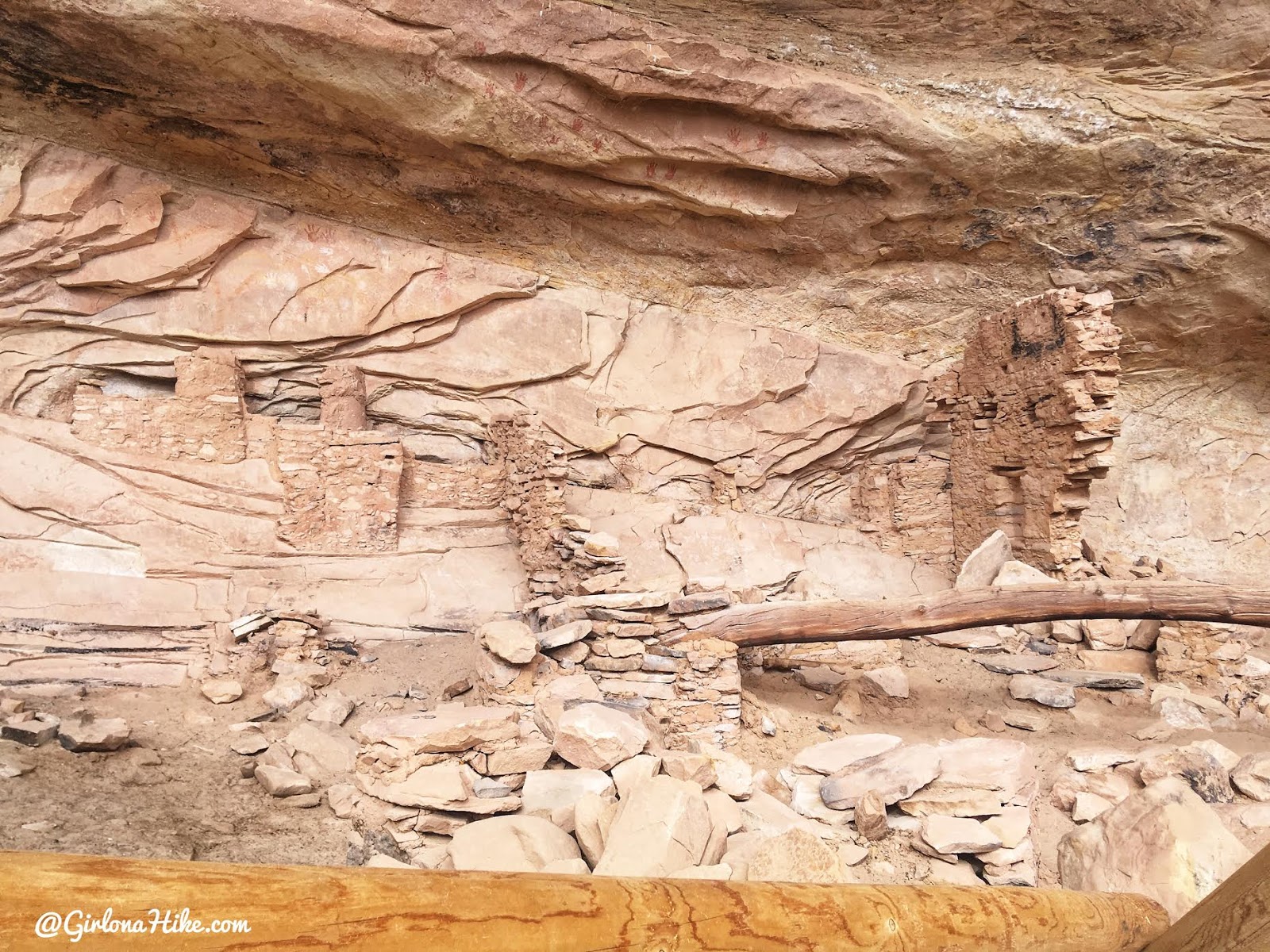 At 7 miles down Butler Wash Road, there is a left fork that leads 110 yards down to the Monarch Cave TH, beside several cottonwood trees.

The Monarch Cave Ruins are the largest in the Comb Ridge area. From the south edge of the parking lot, the trail drops into an arroyo, beneath large Cottonwood trees, across a broad wash. In a few minutes you’ll cross slick rock, following cairns, then down into a small wash. From here the trail is easy to follow as you reach the ruins. As of November 2018, you could walk into the ruin site but I’ve heard that often times it is gated off with chains. The trail ends at a large dry pour-off. 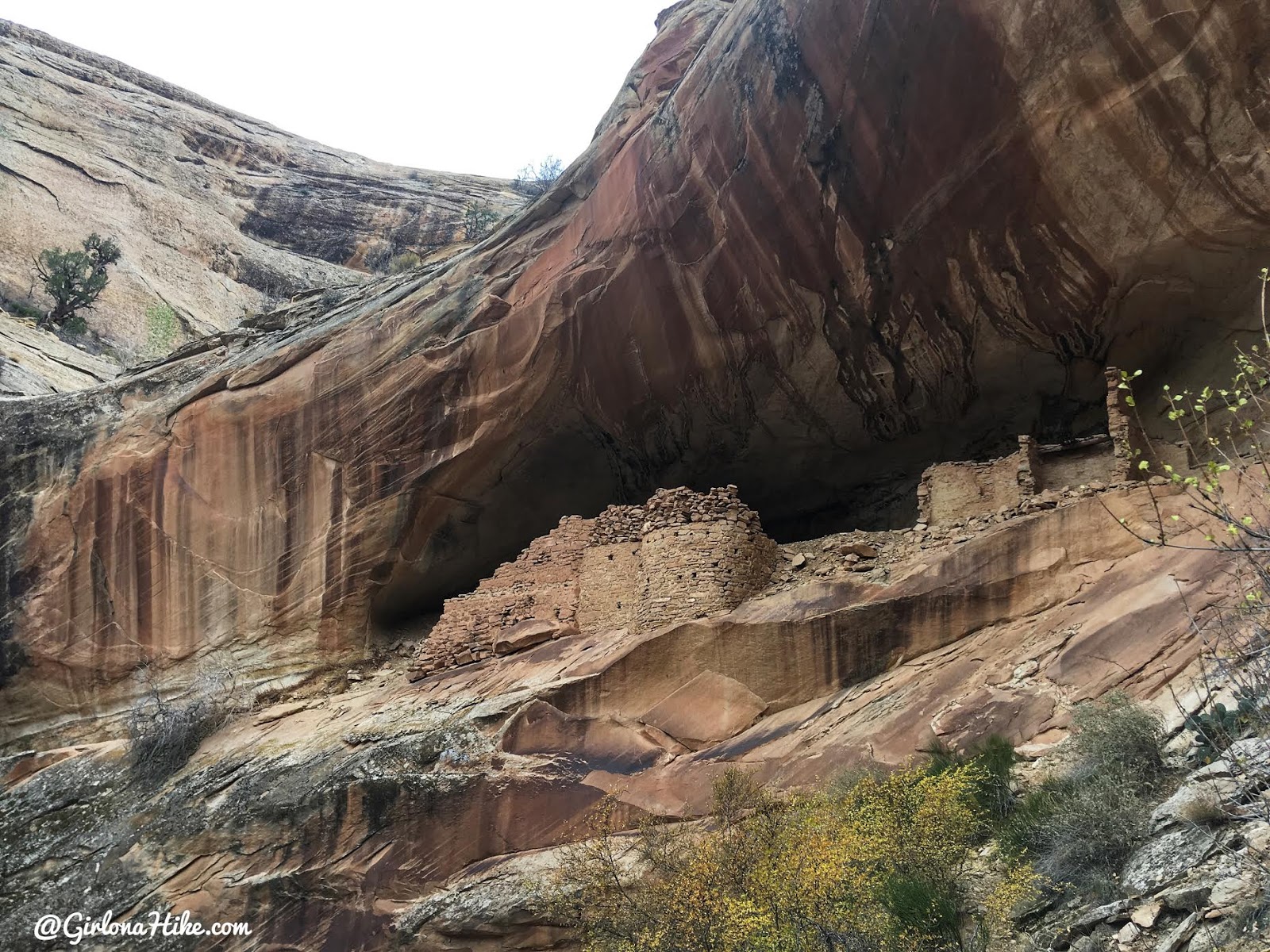 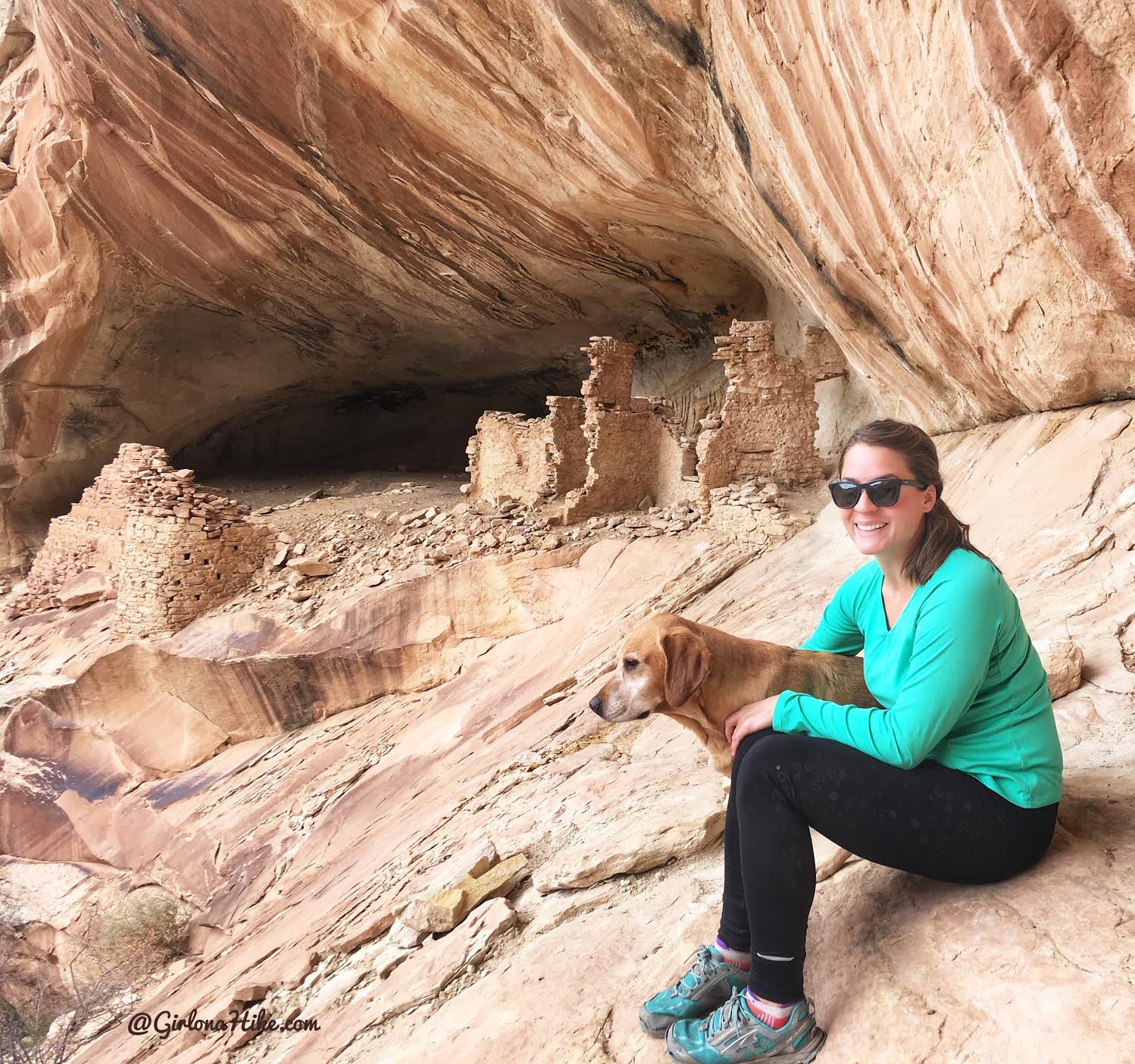 Getting closer to the ruins. With dogs, it’s important to make sure they don’t get close to the ruins, as they could pee/poop, walk on rocks, or damage the ruins in other ways. Make sure your friend holds on to the dogs as you take turns exploring the ruins. If you hike solo, tie them up to a nearby tree. This is as close as I let Charlie to Monarch Cave. 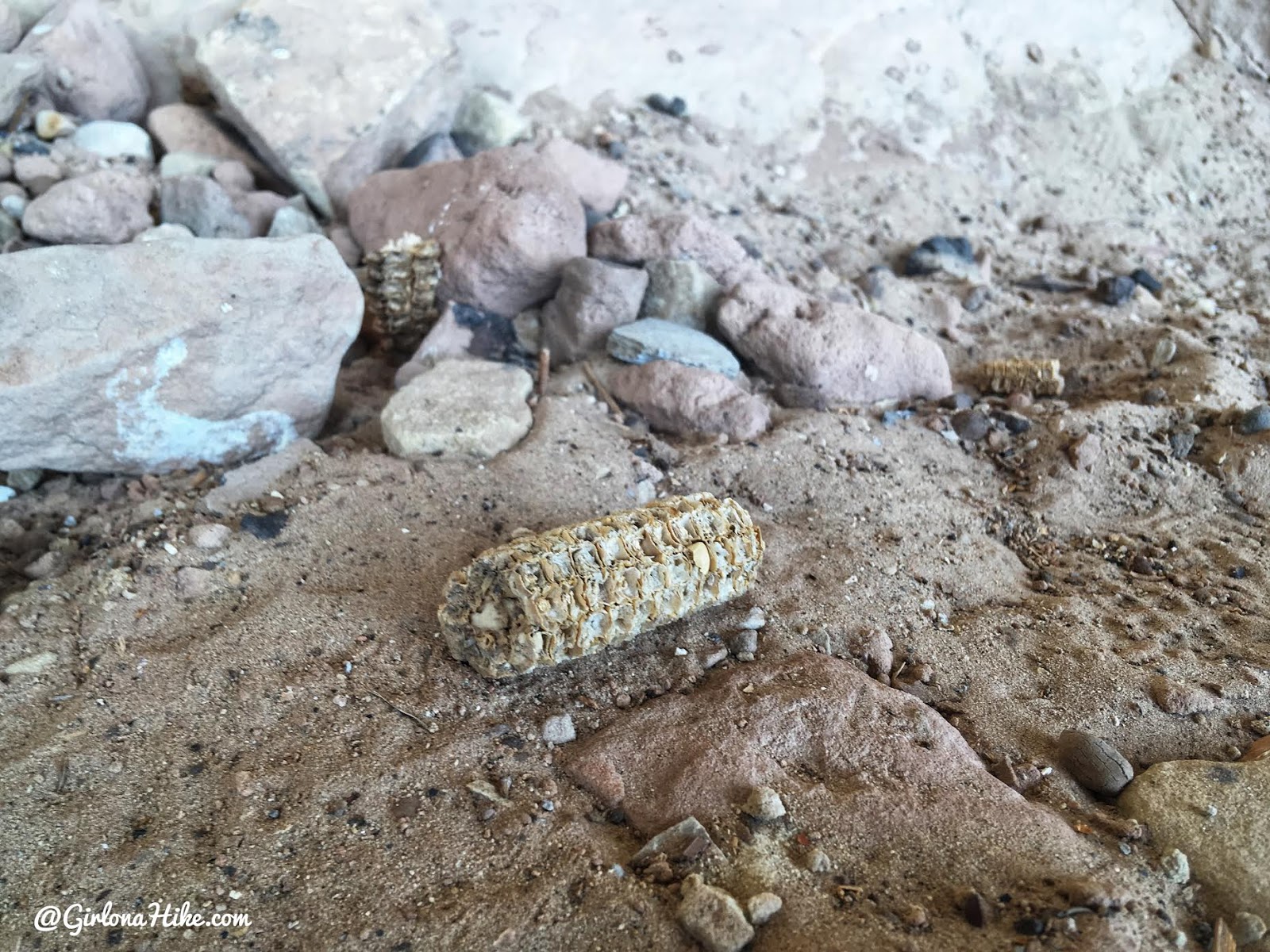 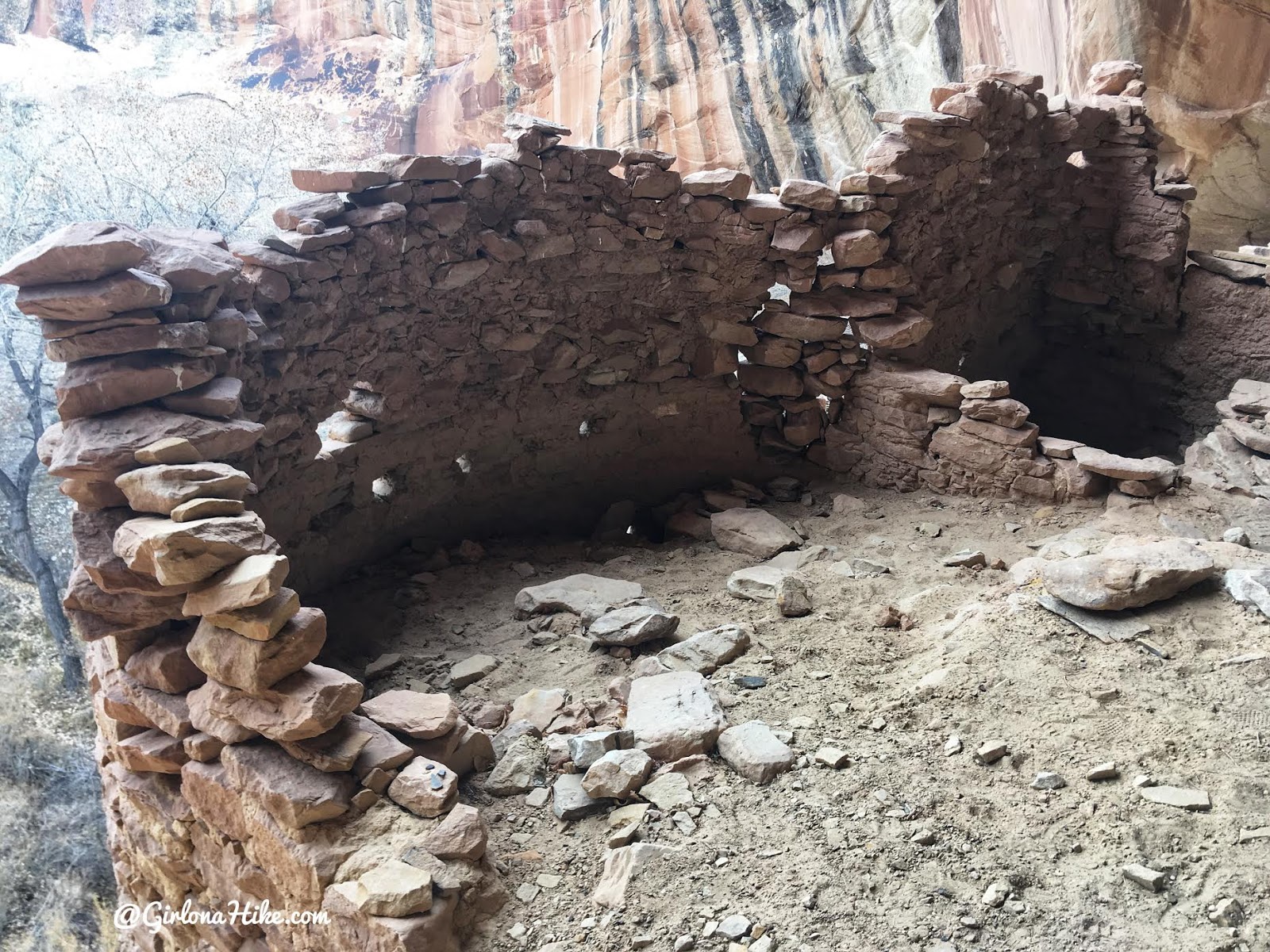 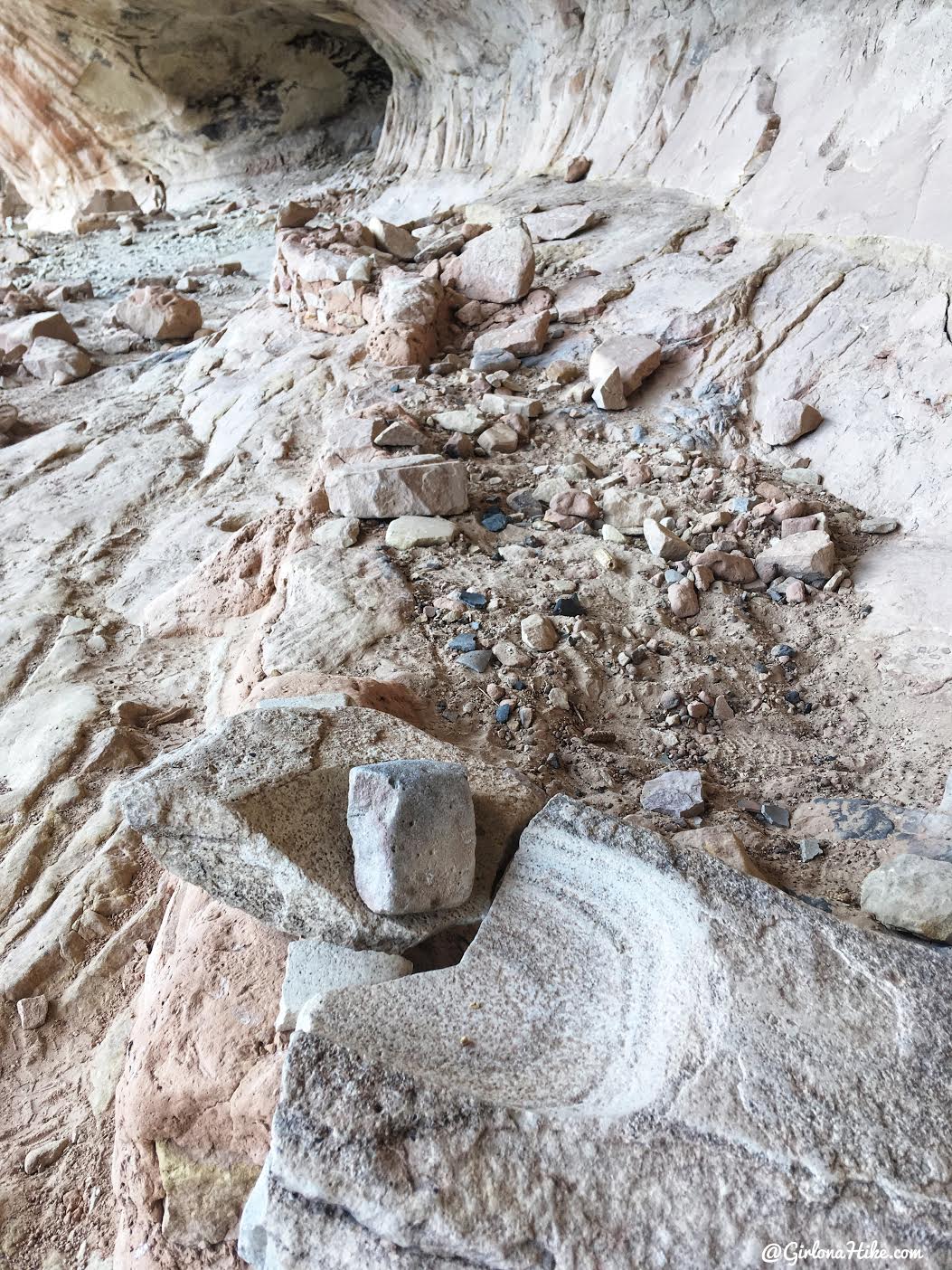 Leftover ground rock that the Puebloans would grind their corn on, to create cornmeal.

9.6 miles down Butler Wash Road, there is a left fork that leads a short distance to the TH, and ends in a short, loop. You should see three brown posts at the start of the hike.

Immediately drop down a washed out gully, then back up. Hike along an old jeep road for about 1/2 mile. At the end of the jeep road you’ll see a brown post with “trail” on it. Follow this as it turns into a well-worn path all the way to the ruins. Cut through a metal cattle guard, that you have to step over. From here hike another 10 minutes and you’ll see the ruins directly in front of you, under a shallow alcove. It’s called Split Level Ruins because there are ruins on both a top and bottom lede. You can only hike to the bottom ruin site. 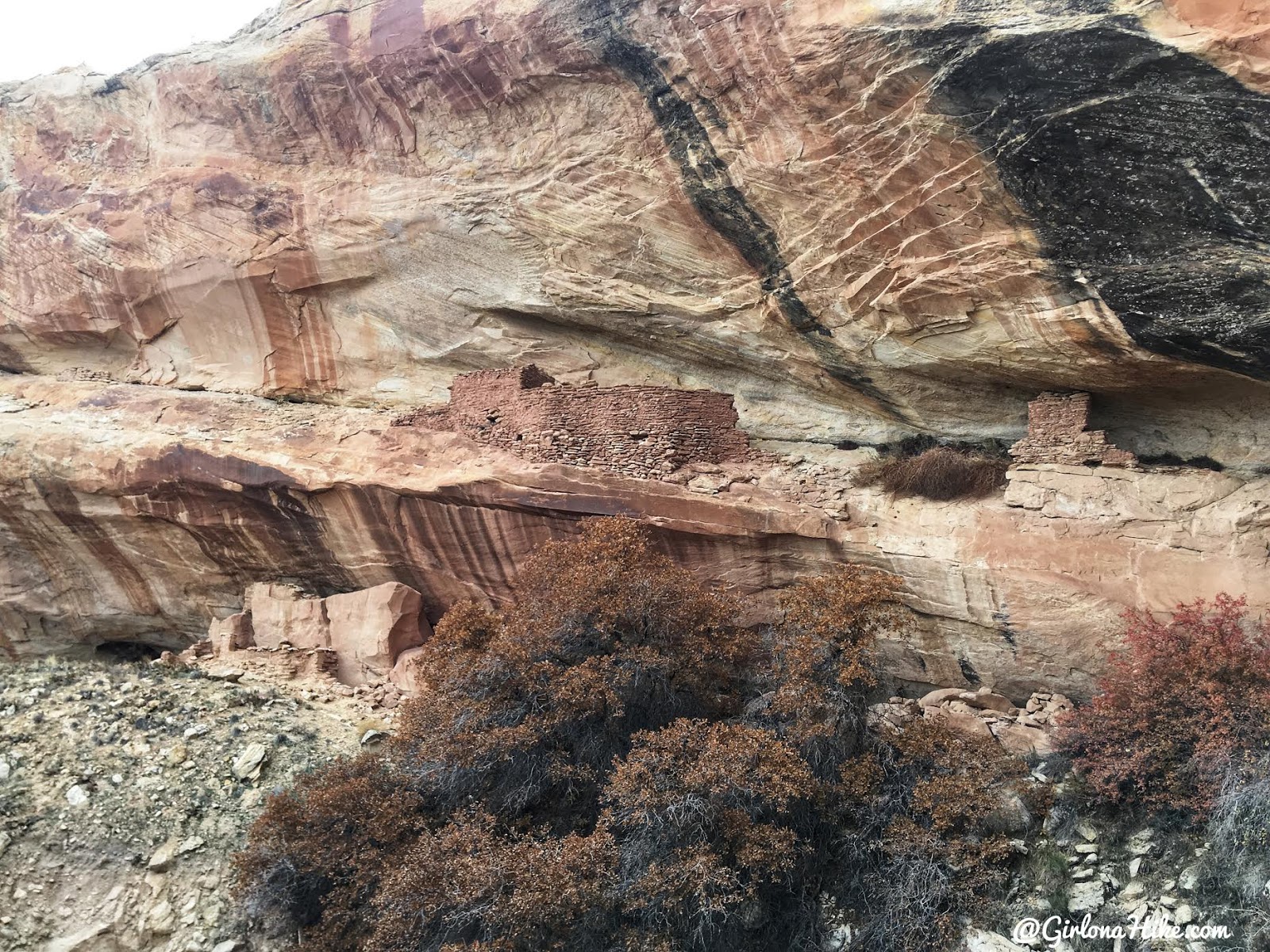 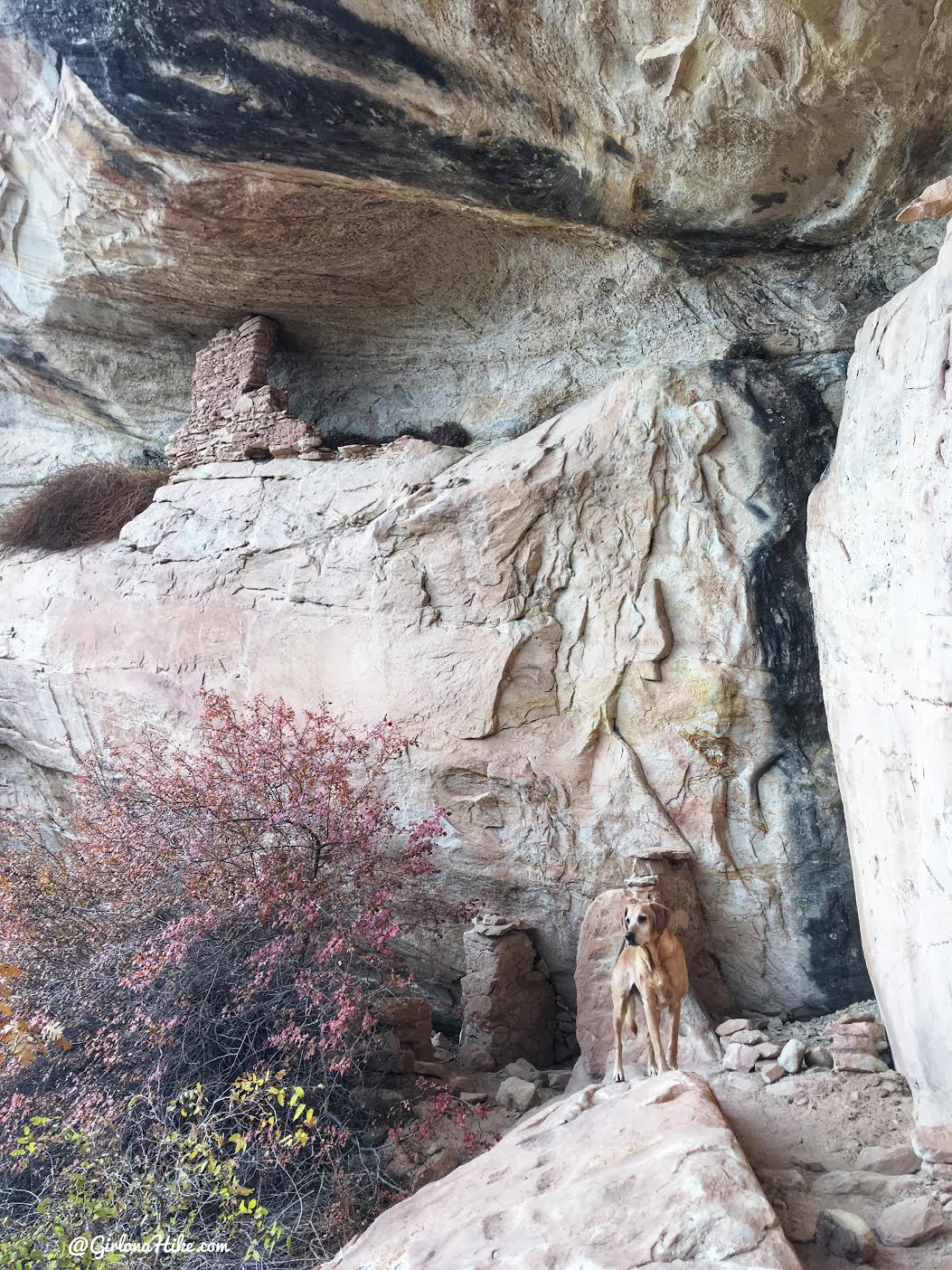 Charlie explores the area as we get closer to the ruins, then we tied him up by this tree. 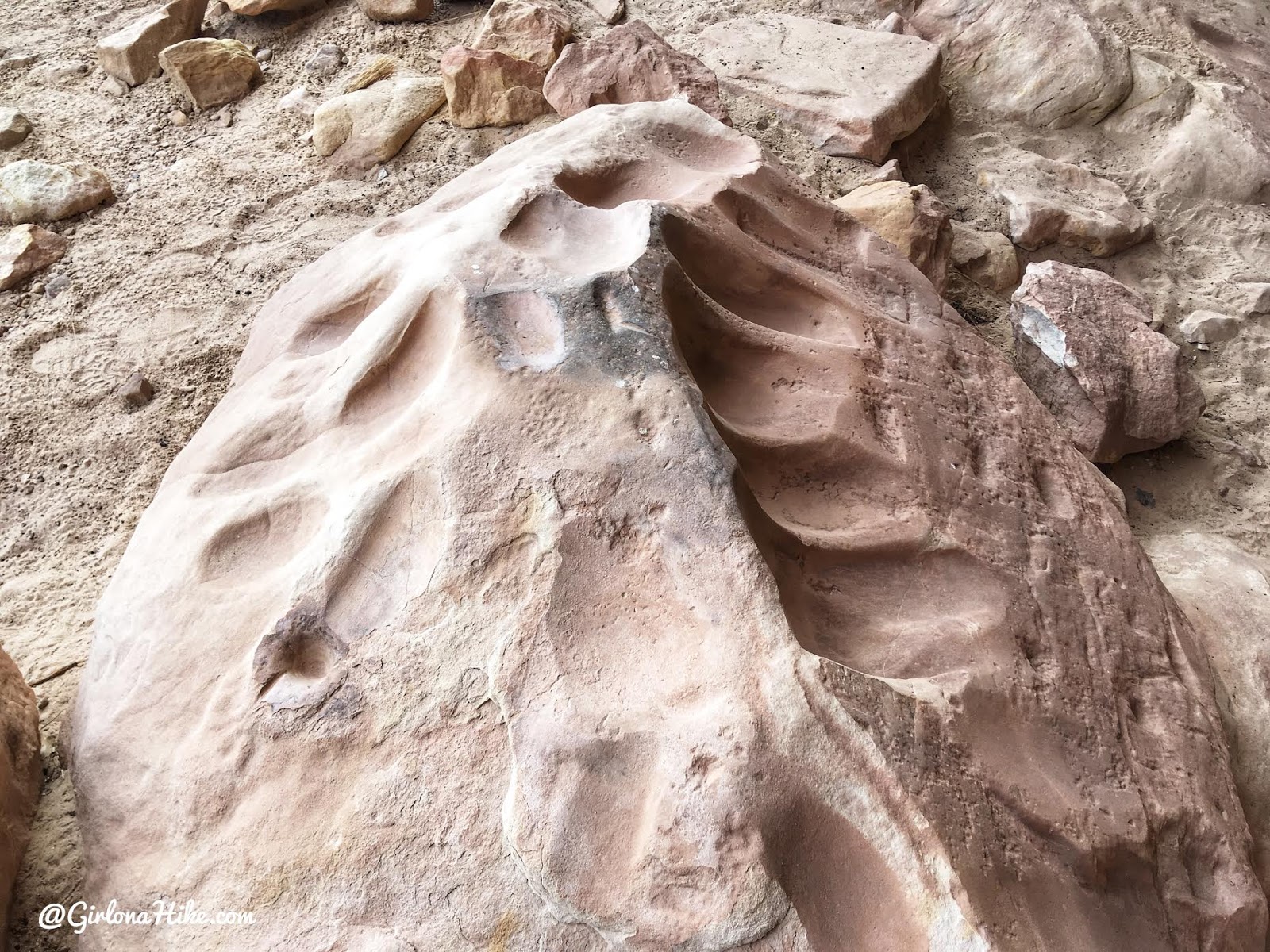 Wow, so many grooves from grinding corn! 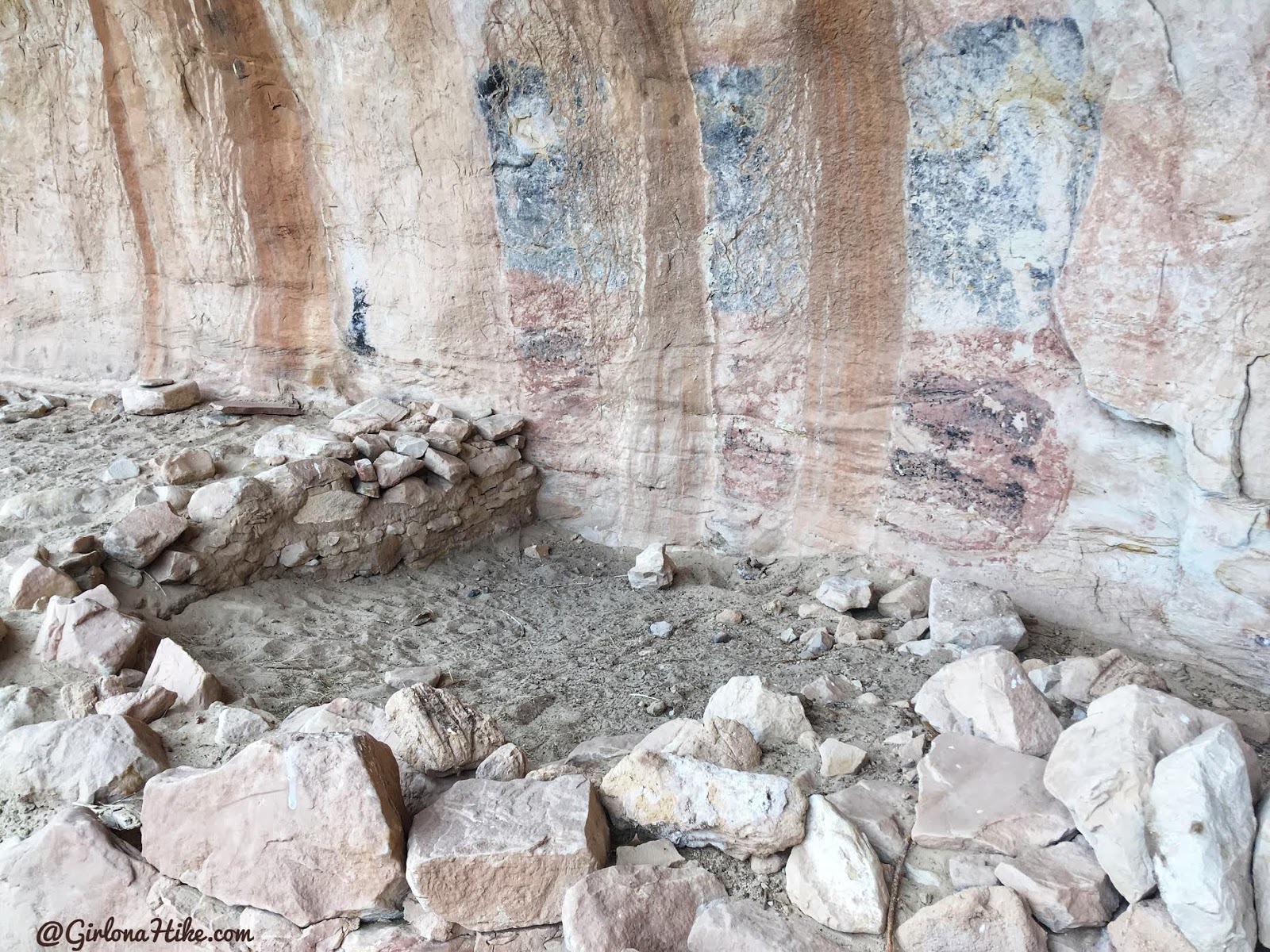 A fallen apart ruin, with the remains of fire scorches along the wall. My guess is that the two brown stripes cutting through it are from the rains over 800 years wearing away the fire marks. 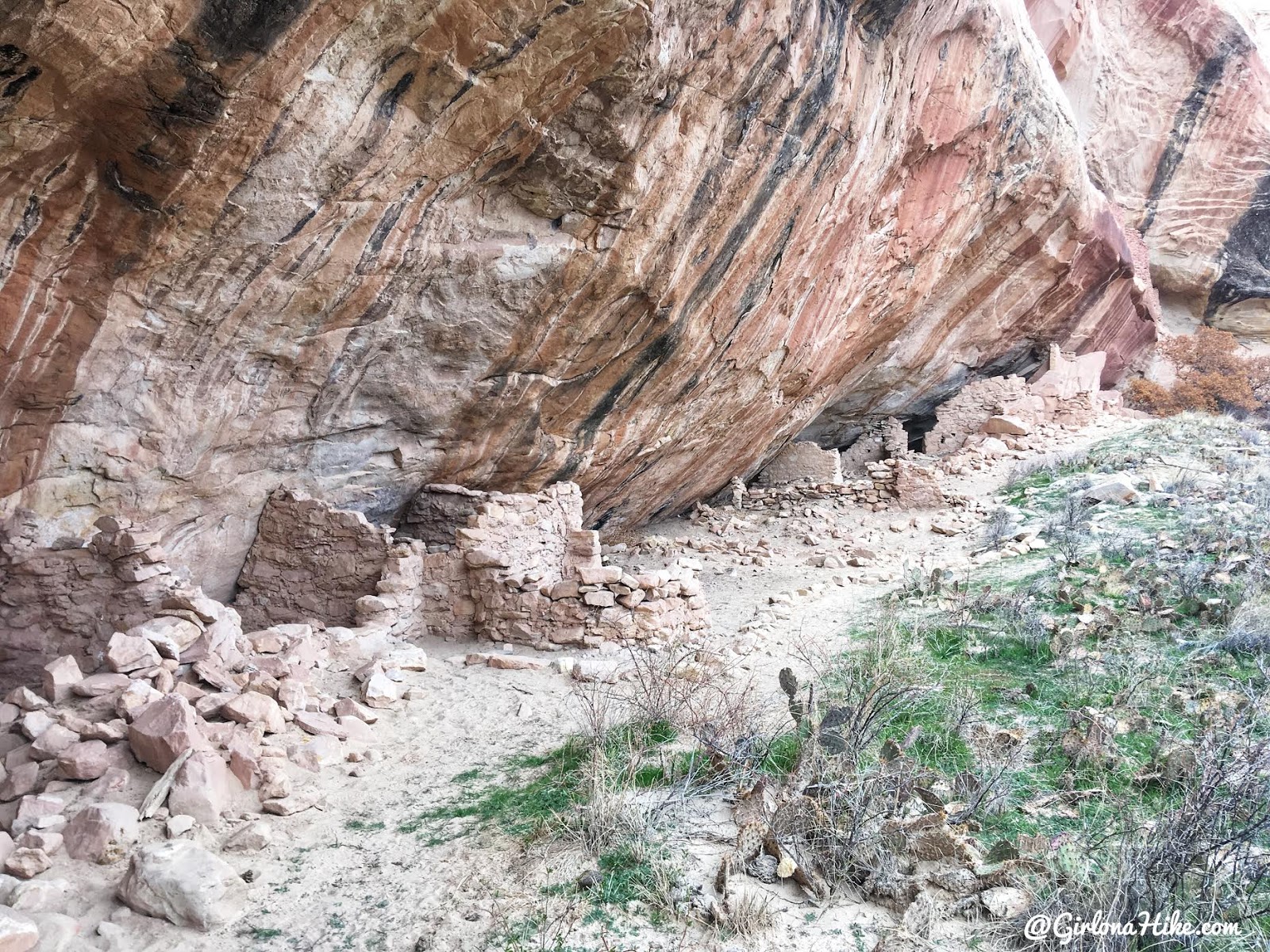 There are TONS more ruins to explore in this area. These are just the most popular. As I continue to revisit Comb Ridge, I will add to this list. For now, explore on your own 🙂

Free, primitive camping is available in this area. The only thing the BLM requests is that you choose a spot that’s already been camped at or created. Do not create a new campsite (meaning don’t drive down roads that haven’t been driven before, nor camp on fresh soil, etc). There are plenty of dirt roads to drive down and find a nice campsite, off either side of the main road. 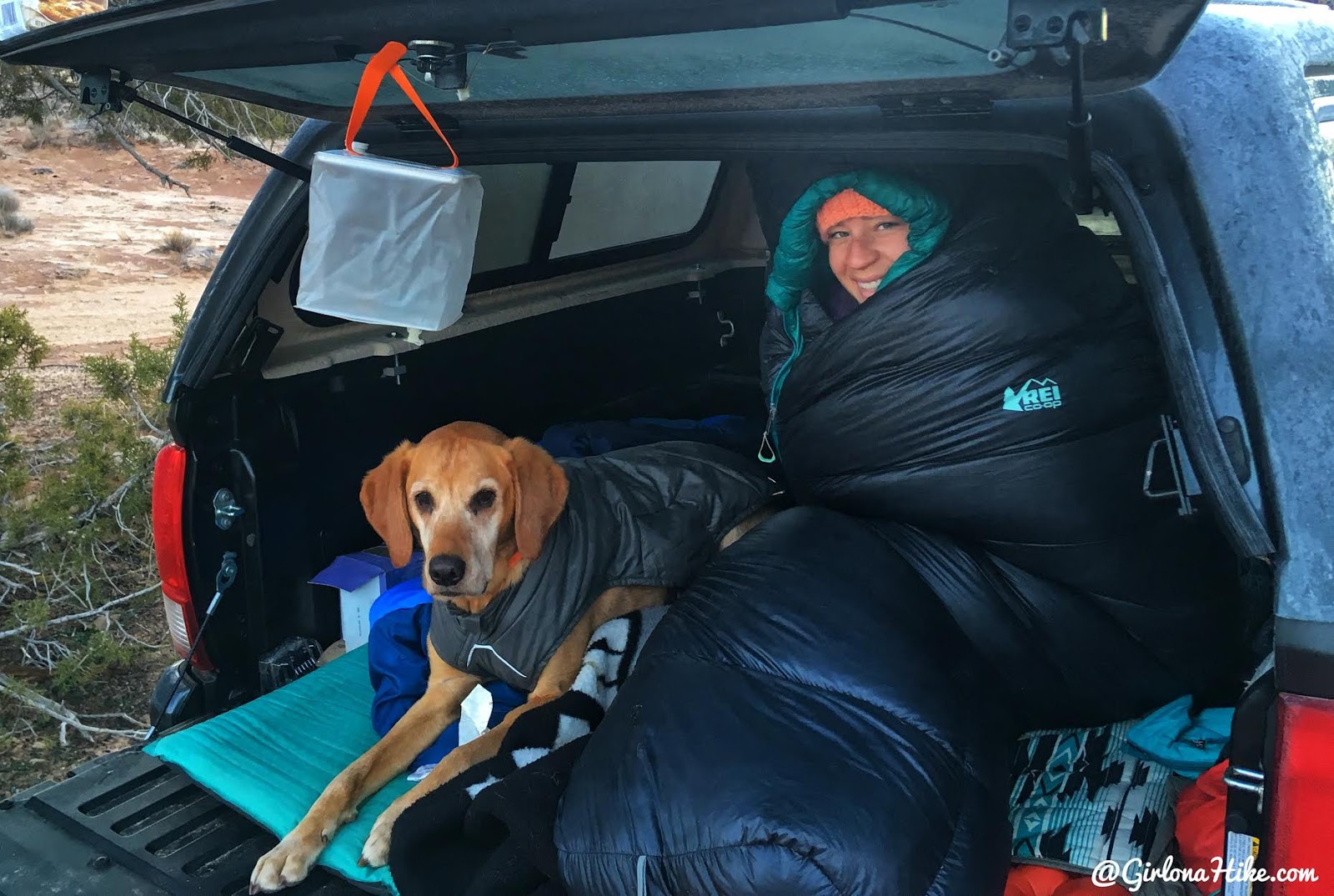 Thanksgiving morning was COLD! I had two layers of clothes on, and was in my 17 degree down Magma bag, plus had the Sea to Summit Reactor Extreme liner inside and I was still freezing. We woke up to a layer of frost on everything, which then started to drip on our gear making everything wet. We got a hotel the next two nights haha! 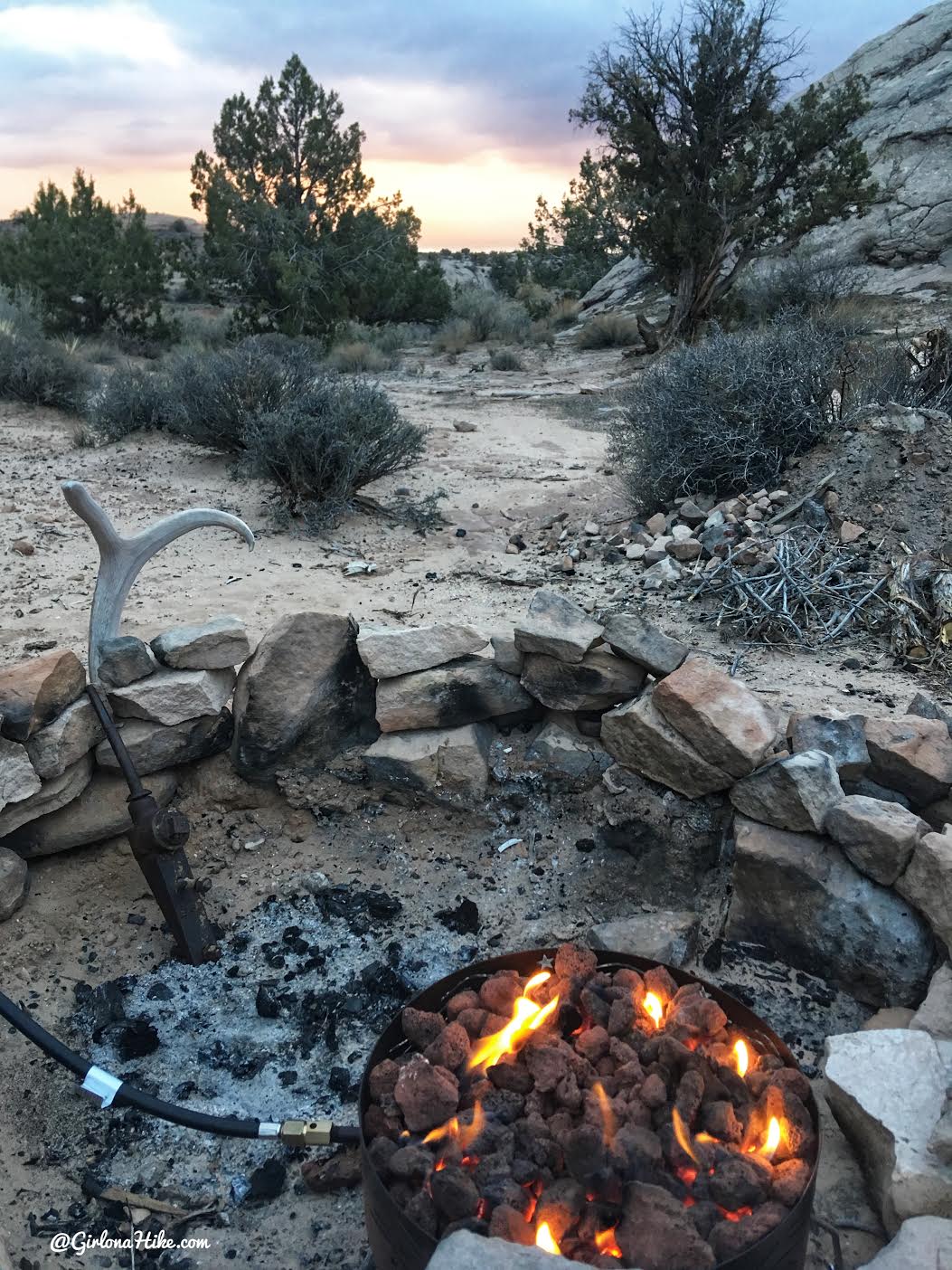 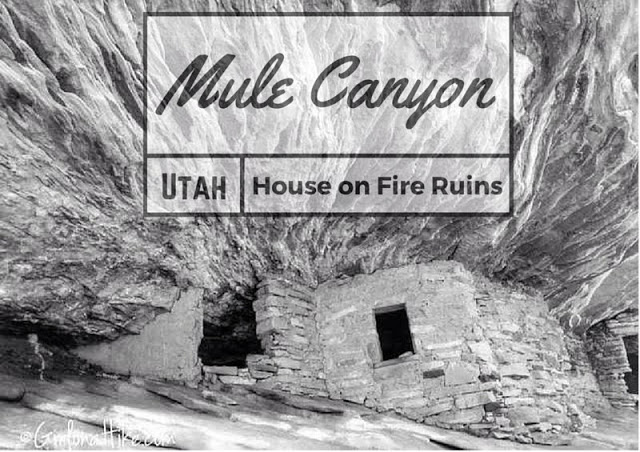 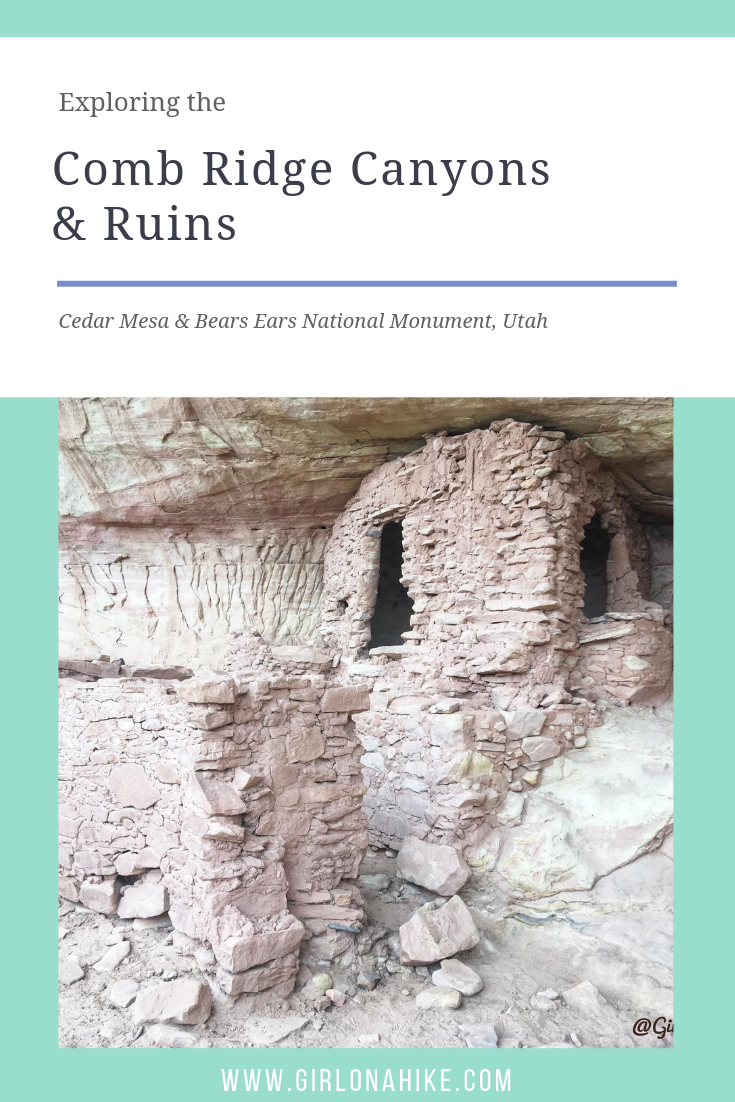 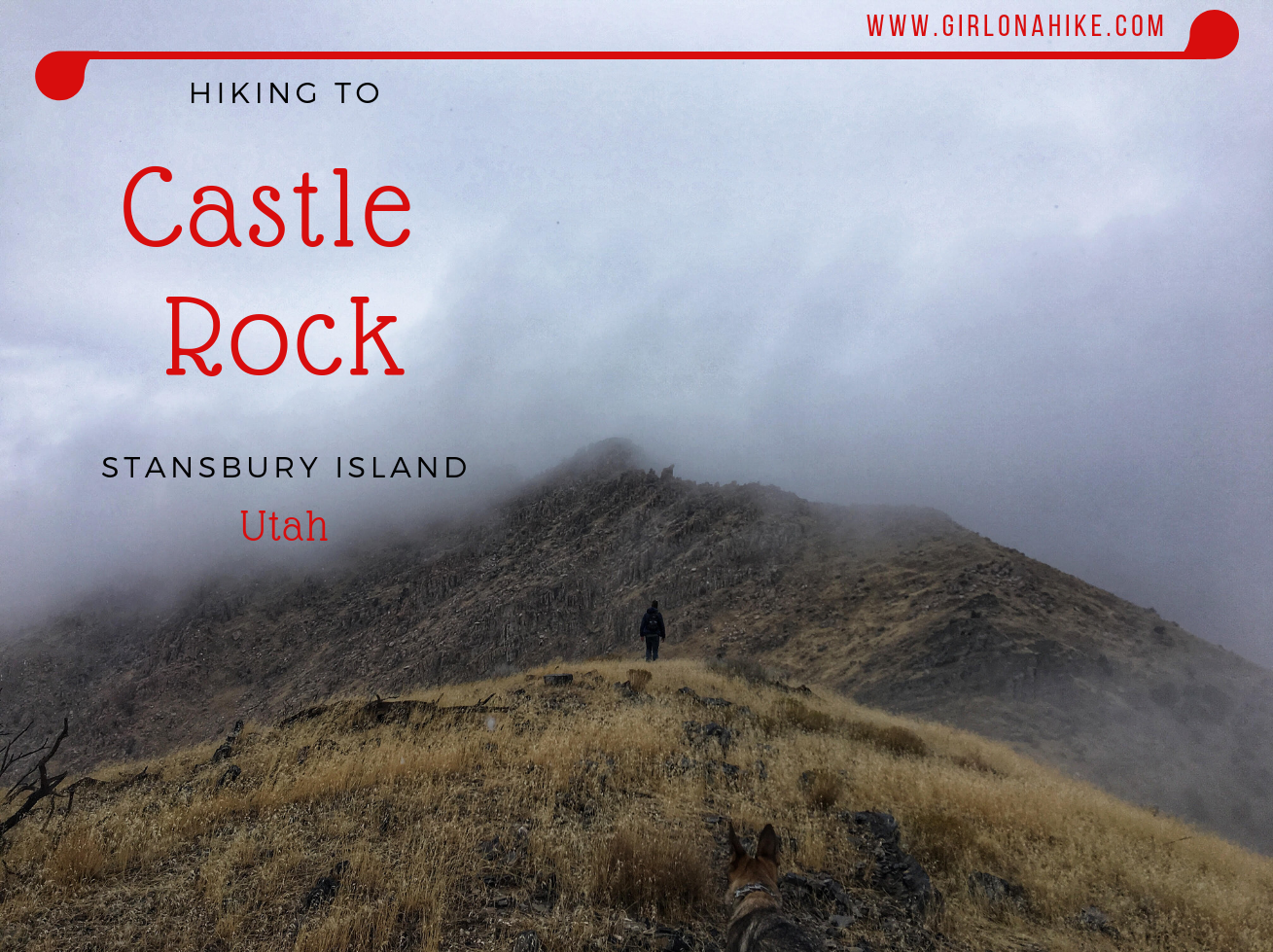 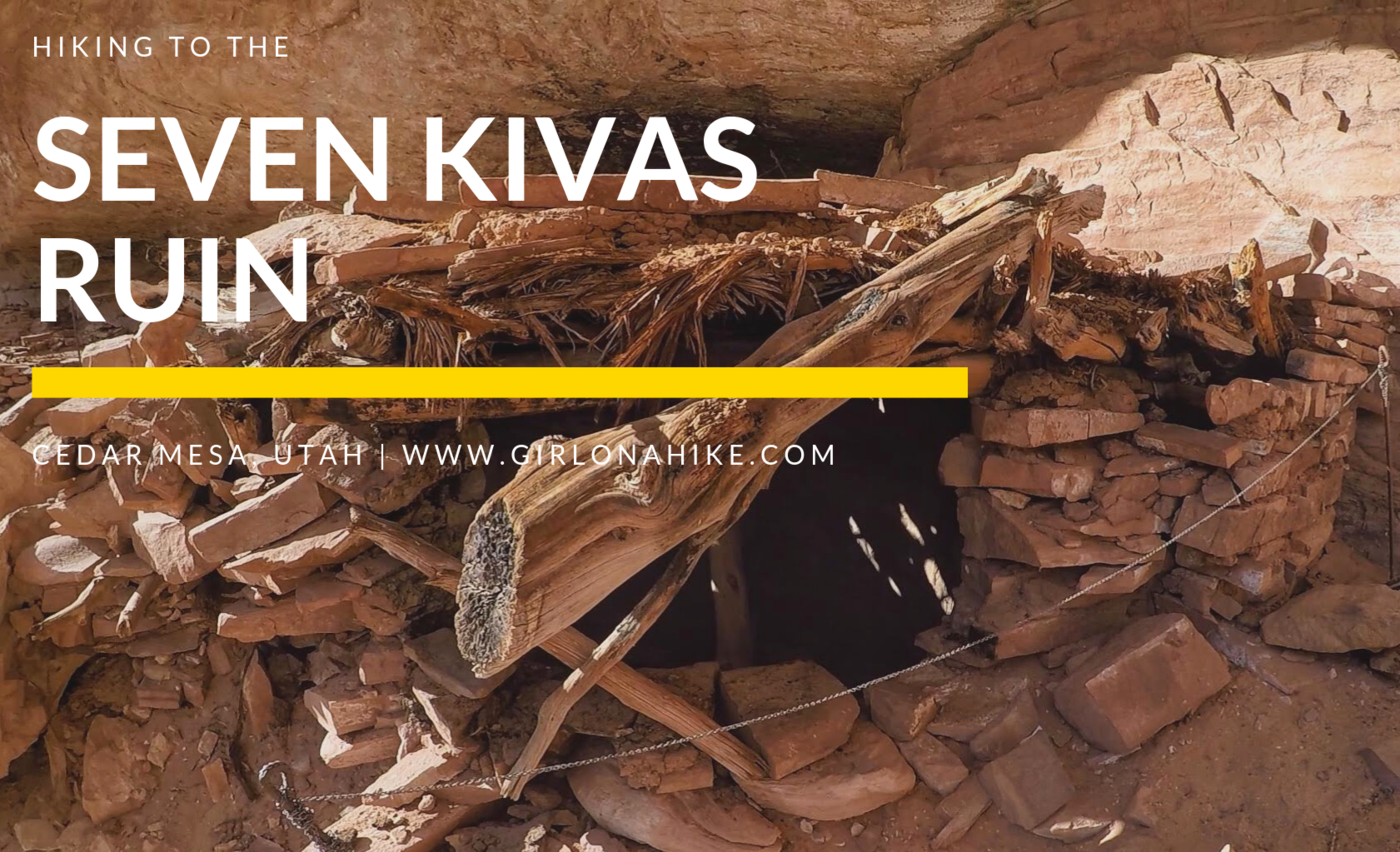 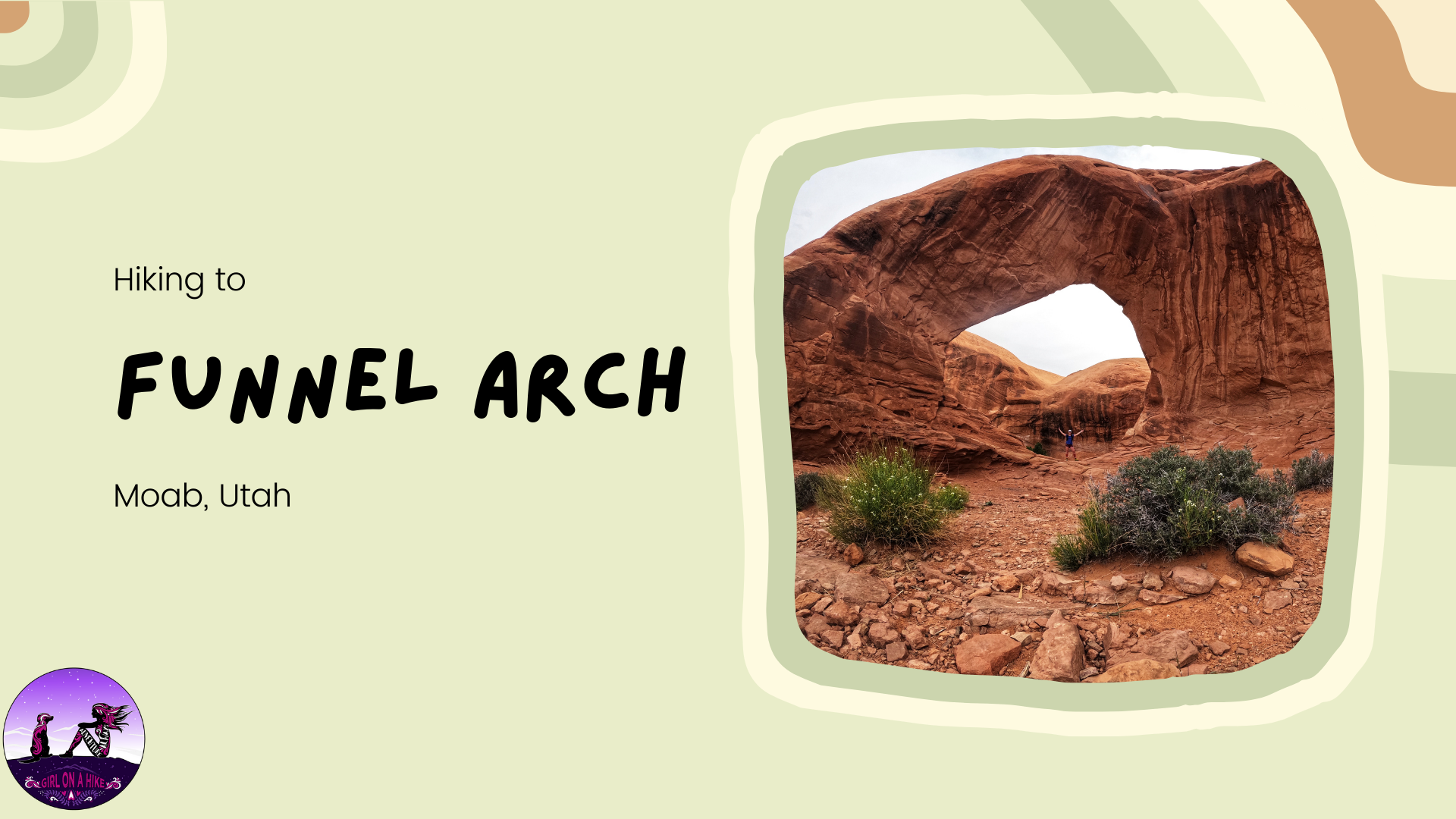 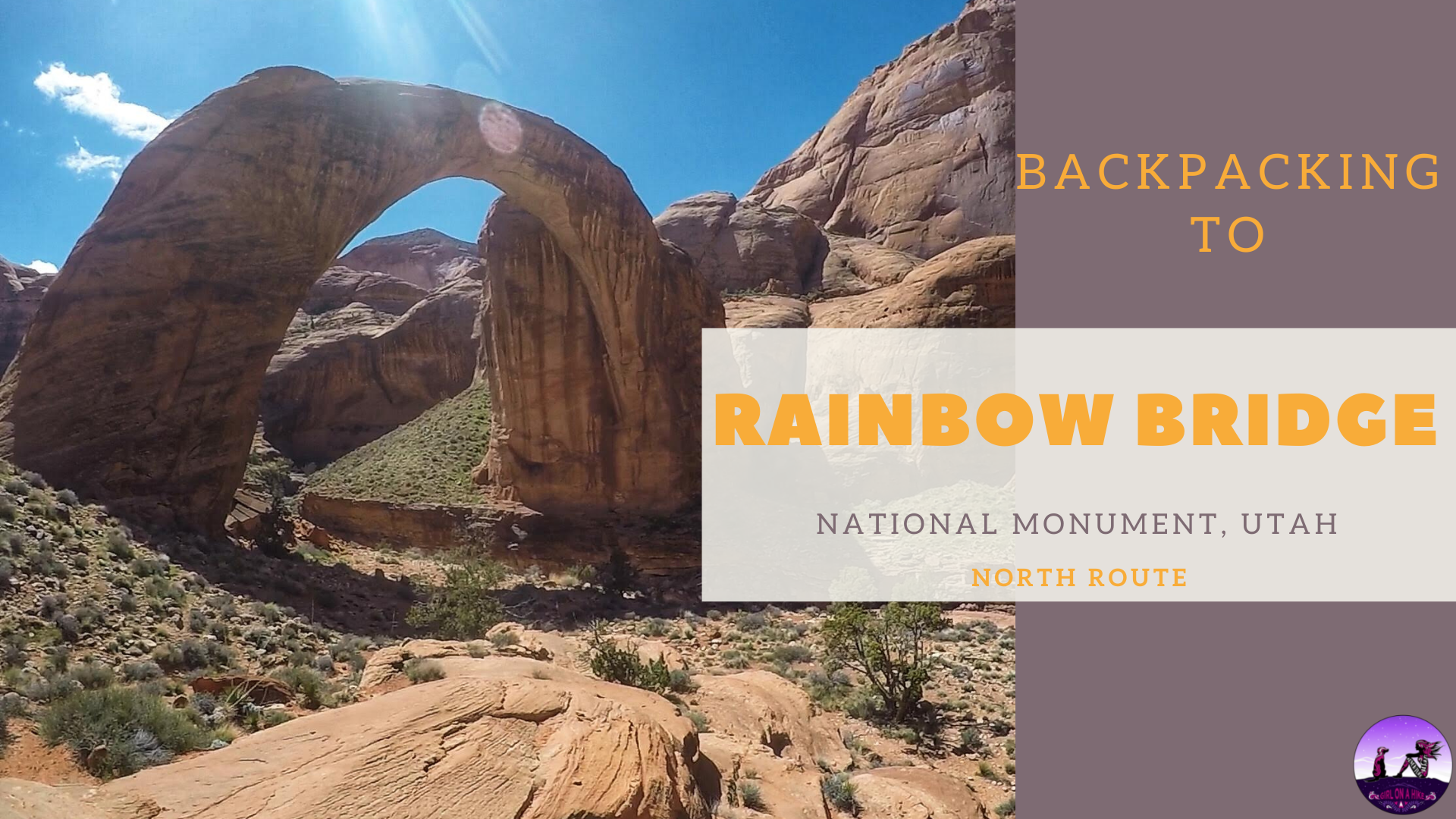 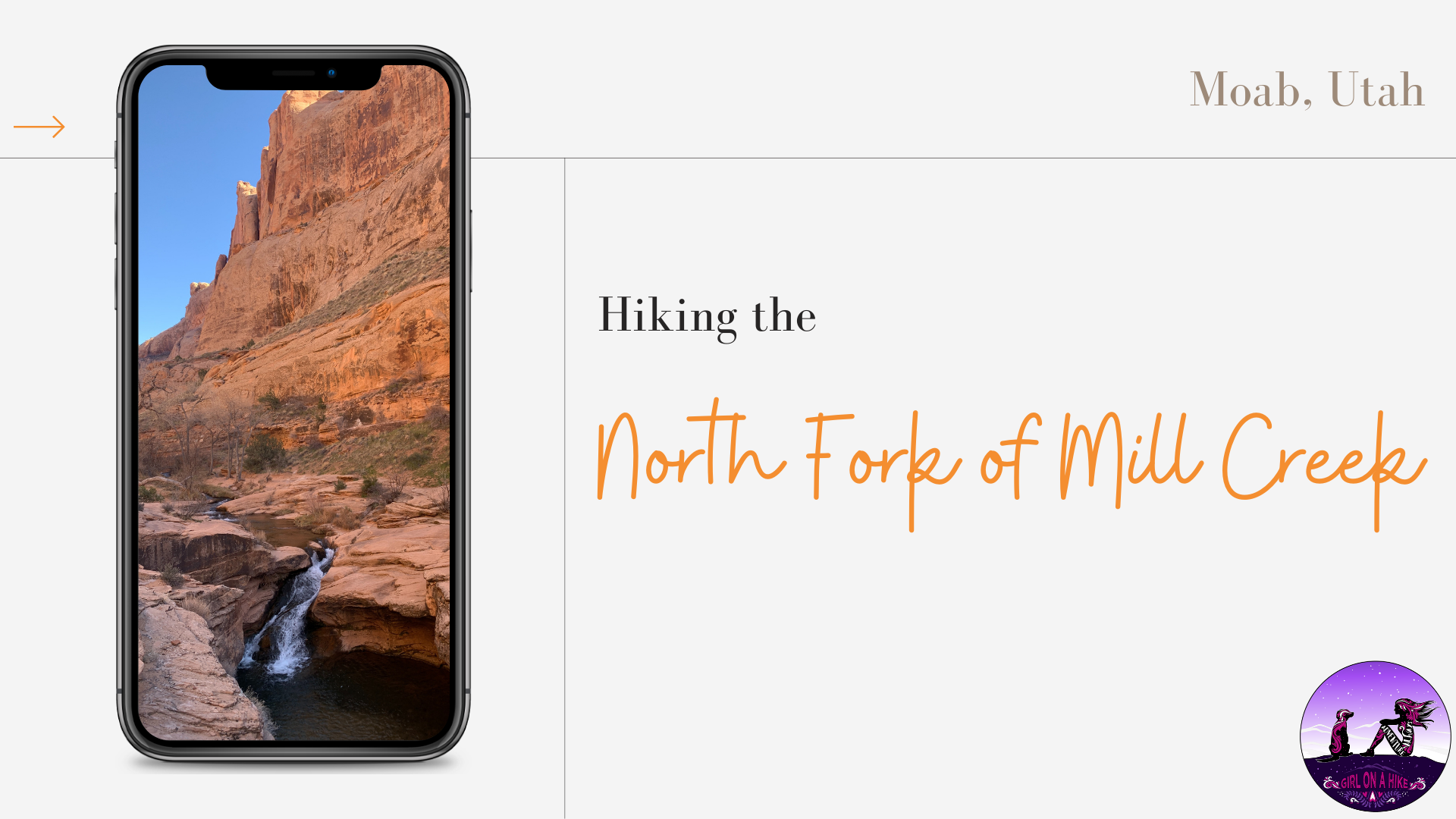